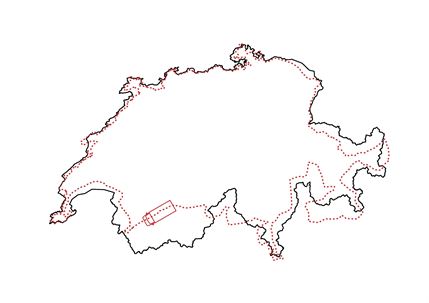 The project
The winning team had opted for the politically topical theme of "borders", exploring it as a spatial phenomenon. The project also raises the question of how borders are perceived by people who actually live close to them. In what different ways do people experience borders? How do we relate to them? What spatial and physical dimensions does a border take on? In order to find some answers, the team actively involves inhabitants from the catchment area of ​​the Swiss borders. Drawing from this research, the team aims to create an exhibition that speaks specifically of Swiss borders, but also raises for debate the subject of borders in general.

This year, 51 dossiers were submitted to Pro Helvetia and in accordance with the competition regulations, seven projects have been selected for the shortlist of the competition.

These seven projects have been chosen by Pro Helvetia based on the recommendation of a specialized jury: In the first round of the selection procedure, the jury conducted three stages of evaluation, which resulted in seven projects remaining in the competition. In stage one, the projects submitted were closely assessed and compared. Each jury member was instructed to personally rate the 51 entries and to pick a selection of them for the actual evaluation. Stages two and three consisted of comparing the results and cutting the number of projects retained down to seven.

The seven projects have been presented to the jury in a meeting in November 2018. The candidates that have been selected based on their presentation have been able to pursue and develop their projects for two months before the final assessment.